Winter Solstice 2011 – Gathering of the Rainbow Fianna Tribe (and Guests) 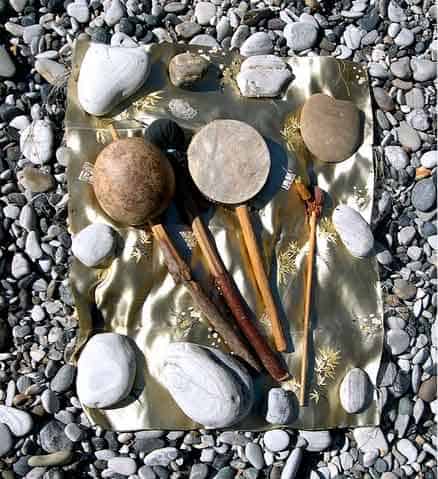 The Winter Solstice is the longest night of the year.  Traditionally, it represents the time of the returning of the light, because, indeed, after this sacred turning of the wheel, the days begin to get longer. It is a time of gathering together for ritual and ceremony to transport our consciousness to higher levels, journeying to the Otherworld for vision and guidance. It is a time to dump all that is holding you back, to die in the darkness of the longest night, and be reborn again with the return of the light.

In Druid terms, the winter solstice is known as Alban Arthan (The Light of Arthur). Apparently, Arthur was born on Winter Solstice and there is rumour that he will return again! Spirit told me recently that it was more important than ever to gather together at these sacred portals of time – to join together as a matrix of light as we unify raised energy for the Highest Good. And indeed, during this intense time of eclipse and solar flare activity, the solstice provides us with a potent doorway of change, as we drop our third dimensional chains and and take up the cloak of the new human.

So here at A Place of Peace, we invite the tribe to join us, either in person or by lighting a candle, and lending your energy. The true solstice is on June 21st, and we will be doing a private family circle then.  But because time is a wheel, we can set our intention that the work we do on Saturday night will be at the right time.

What We Will Be Doing

On Saturday, we will gather here at A Place of Peace in the afternoon to do some preparatory work, including conscious gathering of materials for the ceremonial fire. As dusk falls, we will light the fire, and engage in ceremony and journeying that will cleanse, honour, inspire, and ritually transform us so that we are reborn, ready for the growing light of the coming half year.  This will be followed by a shared vegan feast, and then a joining together in music, jokes, stories, dance – whatever people want to bring to it.

Then, on Sunday, we will gather together in Braidwood to create an ayni despacho, that is, a powerful prayer bundle, which holds our intentions for balance in the coming months.  We will also continue our feast  and togetherness with a shared brunch. I will be responsible for burning the despacho that night in a ritual fire where I will hold space for all who have gathered.

This event is a fundraiser for the animals here at A Place of Peace. So we thought we would try something different and make it available to you on a by-donation basis. We are, indeed, spending time and energy to put this on, but we would like to experiment with leaving it up to you to give what seems right to you.  And if you would prefer a non-monetary exchange of energy, we are open to that as well.

As we usually do for events here in Braidwood, Andrew is organising a limited number of shared and single rooms in town at a reasonable price. If you are interested in one of these, please use the Contact form to let him know.