Update on the Jeparit Ponies

Update: As of 11:40 am local time, only three horses remain alive. But please still act.

Update: We understand that some of the horses were chased until they were exhausted and shot at. There were unprofessional youths involved in the shootings. The ponies died in fear.

The Jeparit ponies came into my Divine Love Healing Circle last night and their souls were released shamanically. Their own anger transmuted and they were truly free. Later, while communing with Grandfather Tree, a little one came and walked beside me in spirit. We did the midnight rounds of our ponies and brumbies together. She said to say, “Thank you to all those with heart.”

When humans love, it makes a difference.

I write this update on the Jeparit ponies with a heavy heart and a call for urgent action. 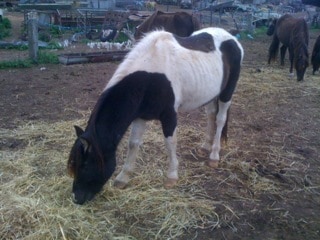 Tao, one of the Jeparit ponies who have been killed

This is a picture of Tao, a soft, gentle man with more courage and dignity than any human I have ever met. He told me he wanted his family saved. He told me he knew he would “go down with the ship”. I offered to buy him and have him here for life.   I did my best to save his life and have sent his photo to the ABC , the Minister for Agriculture and also the DPI.   He was murdered in the last two days of DPI  shooting. I will spare you the pictures of his dead body, and that of the pregnant mare shot in the head. Of the mare and foal standing bleakly and frightened. There was nothing wrong with these ponies. They were innocent victims and I don’t understand how any vet could authorise a mass murder like this. But the Victorian DPI vets did.

What is particularly sad is that these ponies could have had homes. People wanted them. Pony Rescue saved 80 of them. I haven’t given up on some more lives saved today. I light a candle for those murdered so cruelly and will be doing ceremony for them tonight.

Further Pony Rescue had bought and had vet certificates for more ponies which the DPI killed anyway.  When they tried to get the horses,  Pony Rescue were ushered away.   The DPI even brought police in.  A frightening TV cop show type of situation.  And one that I’m not sure is legal.  And indeed an animal lawyer has been contacted.  But too late for the ponies who could have had a second chance at life.

I’ve spent the last couple of weeks liasing with Pony Rescue and Friends in Victoria (link goes to their Facebook profile where photos are — see the album), trying to help save the lives of the Jeparit ponies.  I want to thank you so much for your efforts from around the world, showing what a fantastic animal-caring community you are. Your contributions helped Pony Rescue enormously and ponies were able to be rescued, fed, wormed and cared for.

In the last week, I have been patronised, yelled at and hung up on by those in charge of the Jeparit pony massacre. I have never met such a wall of resistance, where you are passed from person to person, no one answers their phones or emails and you feel like a voice in the wilderness, begging for compassion in a world which has turned its back on such noble notions.

Sadly, despite an enormous effort writing emails, making calls to the Department of Primary Industry, to the Minister for Agriculture and Food Security, to all kinds of press (here’s a story someone else managed to get placed) and other animal welfare agencies, these ponies have been subjected to the worst kind of abuse, being shot in paddocks and yards in front of each other.

This is what the DPI consider to be “humane” to “alleviate the suffering” of the ponies, who Pony Rescue was rehoming. They refused to work with Pony Rescue, who as you can imagine, were very emotionally involved in the lives of these ponies, wanting the best outcome for them. I still don’t understand why the DPI had to muscle their way in, guns blazing, when a kinder more gentle option was clearly available. This draconian mindset completely baffles me.

It has been a very very painful time, trying to save them, and getting nowhere.

To be an animal sensitive in this kind of environment takes a lot of strength, and hats off to my student Carolyn Bischoff, the Pony Rescue girls Tania  Decker and Jodi Hutson , and  all theother on the ground supporters, because it is always a challenge to watch animals be killed just because some authority says they have to. The girls have been run off their feet and Tania is currently in hospital with MS.   It didnt stop her working around the clock.  They have done their best and we are all feeling that horrible feeling when our best is not good enough. Eighty horses is a fantastic effort. With more time and support, they could have got them all.

I had to tell Tamsin that Tao had been killed. After we had opened our hearts to letting him in – him and any other who would have found sanctuary here. It wasn’t easy. Sadly she learned long ago that people in authority are often wrong. And I teach her, as I teach my students, that we have to know what the right thing to do is by our hearts. Walk our own path, with our own code of ethics. It wasn’t so long ago that our society once believed that women did not have souls. And today it still doesn’t believe that animals do. Animals are still under “dominion” and are enslaved and subject to atrocities.

One of the many letters I wrote to the DPI challenged them on their choice of “humane” action. What kind of world are we creating when the solution is only found in violence?

Why couldn’t they work with Pony Rescue? They could see the girls had done a mammoth job with these innocent little ponies.  The girls could have been supported , not hindered.  Could that have been so hard???

The lucky ponies, by the way, who have gone to new homes are quickly regaining their strength and settling in, enjoying the love and care they are receiving. So DPI excuses of “they are too wild to be rehabilitated” are just ridiculous. And too thin is also a poor excuse. Hands up how many of us have rehabilitated  thin horses. I don’t understand this mindset. I do know that I want to change it.

If you would like to protest this situation, and help try to save the rest of the ponies, please contact Peter Walsh, Victoria’s Minister for Agriculture and Food Security (link goes to his contact page, where you can find email addresses and phone numbers).

Or you can speak to the Department of Primary Industry in Victoria (link goes to their contact page). The Departmental Secretary is Richard Bolt, and the woman in charge of the decision appears to be Deb Morrison (those are both email links).

Or to the press. Please ring all the press you can today.  Go to the Pony Rescue page on facebook above and send them photos.  Make them feel.  The public has to know that these horses had the potential for a second chance.   They woudl have had homes.  they had people who cared.  Make a noise for the ponies who suffered under our so called animal welfare. And maybe we can still save the remainder and let them have love in their life.

I rang the RSPCA by the way.  I was told  this situation was completely under the DPI jurisdiction and the RSPCA could do nothing.  Where is the law that protects animals?

If this sort of behaviour angers you and frustrates you and makes you feel helpless. Then channel it into action. Please call and email any press you can and protest against the murder of these frightened ponies who coud have been given a second chance at life in loving homes.   Question their action.

When I spoke to Simon Price of the Department of Agriculture (03 99385954)  I was assured that this would be done humanely.  That to allay community fears, the RSPCA vets would be on side and absolutely ponies who could be re-homed, would be,   I begged him to talk to his people and make sure they did that.

Thank you for your compassionate action.