Push Back the Dark 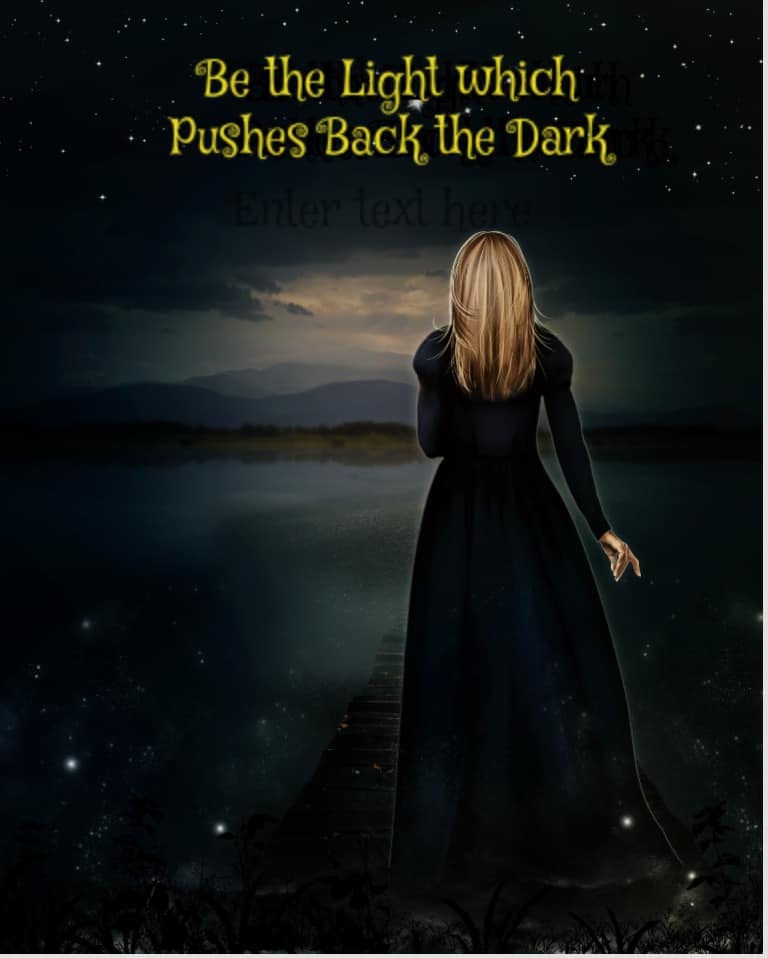 Push Back the Dark by Billie Dean

It was dark in the valley without stars and Cassie felt a knot of fear growing in her chest. Her toes curled over the edge of the cliff. Without the need for calling, Wolf was suddenly by her side, She put her arm out for Snowy Owl, who landed without a sound.

“We need to push on,” said Cassie.

But fear snaked through her, leaving her unable to walk forward even though her friends were with her. And both of them could see through the Dark.

What does the world look like?
Beautiful, sent Snowy Owl.
Perfection, smiled Wolf.

She hesitated on the cliff of despair. The Dark was all around. It was heavy, oppressing and threatened to choke her. It squeezed her chest, making breathing difficult.

Calm yourself, lass, said the old wolf. Before her eyes, he grew in Light. He shone like a lamppost in the dark, letting her See. Snowy Owl followed suit. The world was illuminated and Cassie could see the world as they saw it. Green, peaceful, bliss.

It’s a brand new world waiting for you, sent Wolf.

Cassie remembered her teachings. She asked the Mother Earth to transmute her fear into love. She asked  the fire within to devour the fear and give her the flame of passion to move forward, She asked the Divine to turn up her Light—all this while standing still on a cliff with invisible friends on the darkest night of the dark of the moon.

I am like the Fool of the tarot, she thought to herself, smiling. A bundle of innocence walking into I don’t know what.

The Light filled her and filled her until she could only feel joy. Her light grew. She radiated love. And in her presence, the Dark bowed, and retreated.

Cassie took a step off the cliff. And flew to the new world of beauty.