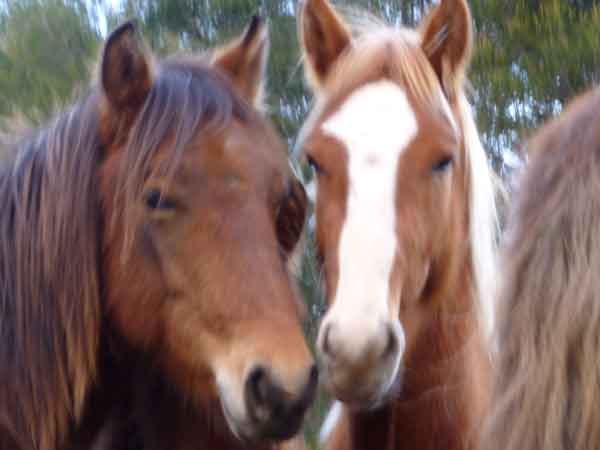 Suddenly, late last Wednesday night, we got the call from NSW Parks and Wildlife that our brumbies had walked into the traps. 15 of them, including three pregnant mares. They wanted to deliver them on Saturday, and I had to leave on Sunday with Tamsin for her writing course in Sydney. It felt like really bad timing. High winds had blown trees down across fences, the yards needed re securing and we had no meadow hay – yet.

I couldn’t sense the stallion I had been communing with down in North Kossi, and my sense of the herd that was trapped was that they were waiting for my decision. They had gone inward.   It was very curious. They didn’t feel like the family who had asked to come to me. And that put me in a huge dilemma. If they weren’t mine, then what about the promise I made to the stallion who had contacted me? If I took these horses, I wouldn’t be able to support the ones who had contacted me as well. And as a shaman, it is vital to me that I keep my promises.

It turned out they just didn’t want to pressure me. Or maybe it was another shamanic initiation of the animal kind. I nearly waited for the next lot. But I didn’t because on one level I knew these were the ones I was supposed to take. One of the ways I can tell is because I cry when I have made the wrong decision.  Or when something is wrong.  Or when there is impending death.   That is my heart intelligence speaking. I cried and so I quickly said “yes” to the horses, and we hired some help to get the place ready on Friday.  Kim Hollingsworth, who had been liaising with Parks and Wildlife for the rehoming of these brumbies, turned up with grass hay an hour before the horses arrived , and all deadlines were met.

In animal rescue, like many other areas of life, it usually happens that it isn’t the best timing, but you jump and step up, because you have to.  Some of this family would have ended up dead if I hadn’t jumped and as soon as I found that out – no question. They all breathed a collective sigh of relief and I felt I had passed some kind of test. Phew.

And so the truck full of horses arrived.

The stallion, a beautiful intelligent big blue boy, came out of the truck first, backwards. Our ancient wooden ramp collapsed under his weight. And he didn’t bat an eyelid. He knew he was coming here. He wandered calmly unhurt around the yard while Andrew and I held a positive space to counter the concerned talk of them “breaking their legs” as they came out of the truck directly into the yards.   The stallion nickered, and out the others all came – one colt and lots of mares and foals – 13 of them.  One after the other.  All safe. They got out of the truck as if they were born to it. It was an incredible moment.

And so it was with relief and great happiness we celebrated their arrival in their new forever home. There was 14, not 15. And I found myself mourning the phantom horse, as we had mentally and emotionally stretched to take 15, instead of a family herd of about seven, which is what I had been expecting.

The stallion came to me in my dreamtime and told me his name was Merlin. He knows where he is and I am sure we will have a good journey together. He is gorgeous.

All of the horses are settling in quickly. They are so incredibly gentle and sweet. They told me they were used to silence and we were very noisy. They are now used to the dogs. They are so relaxed that they lie down. They are gorgeous and intelligent and we are so in love with them and I am grateful that 14 (probably 17 with foals) are safe from any kind of human abuse and cruelty and will run safe and free at Ballyoncree.

I would like to publicly applaud Parks and Wildlife and also Kim Hollingsworth for their work in rehoming the brumbies , instead of culling them.  This is the sort of world we want.  One of compassion and kindness to all species.

So for me it has been a bittersweet two weeks. The safe arrival of horses to a safe house, and the horrible murder of others who were not safe. The world will become a better place for animals, when we take the compassionate action needed to make it so.  And keep focusing on the dream we want, as if it is already.

The world is now a place of Deep Peace for ALL Species. It is so.