Fae Hut in the Woods 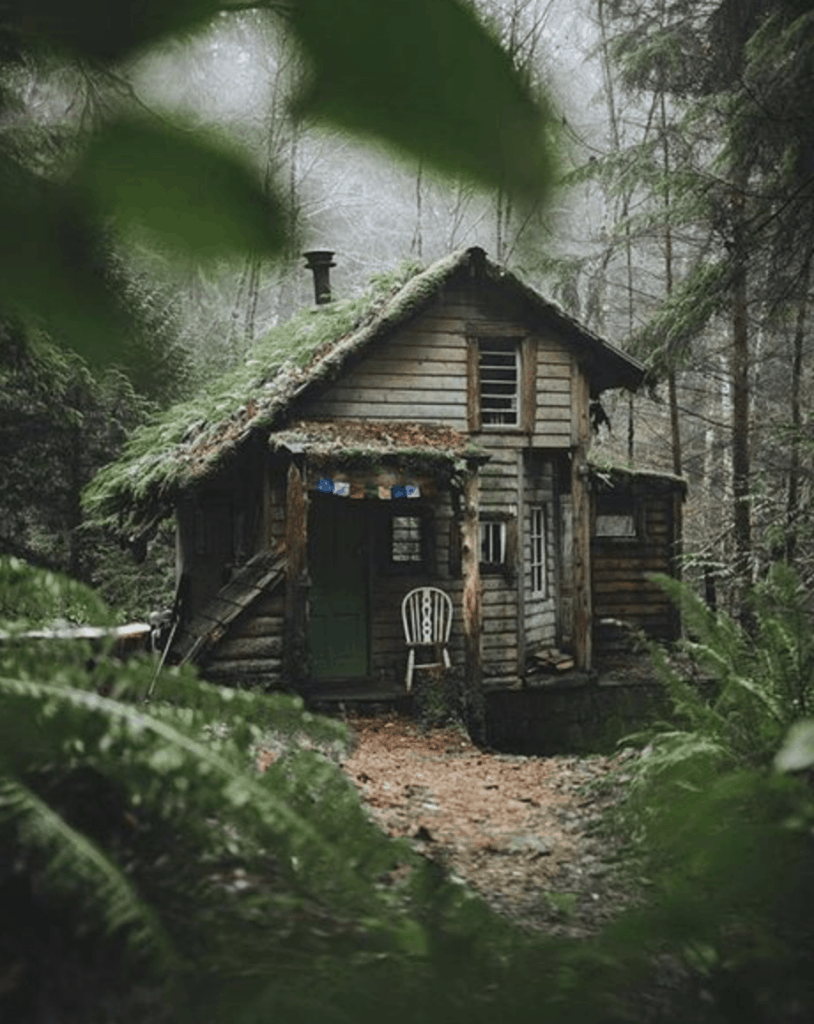 The rain fell in large drops, bringing cold to the day of grey clouds and talking winds.  Aoife  ran into the cottage in the forest, shrugged off her wet boots and outer jacket, and threw herself laughing into the chair nearest the fire.

“Don’t sit on me,” grumbled Black Cat, called Black Cat because he felt names boxed him into a particular frequency.  And Black Cat hated being boxed in. Except for now.  Right now he was happy to be inside by the warm fire, curled up in his favourite chair.  He did not, however want to be sat on by the two legged being.

“Oh you’re in a fine mood”, she said, leaping up again to the old wood stove, putting another log in it and moving the kettle to the fire.  “It’s time for tea!”

Before Black Cat could wonder at her brightness, he sensed a presence at the door.  Ah. The Lover was back.

Aoife grinned at him, getting two mugs from the cupboard. Her smile told him everything he wanted to know.  Despite himself, he purred.  Happiness was contagious.

The rain fell in large drops, bringing cold to the day of grey clouds and talking winds. Ruairi shook his black hair at the door of the cottage in the forest.  With its moss covered roof and timber walls, it look part of the forest itself. In the alcove, he took off his wet coat and boots and suddenly felt very vulnerable.

“Aoife, it’s me”, he called, knocking at the thick wooden door.

The door pulled open so suddenly he nearly fell over. But there she was like a bright flame of light, all fiery hair and a 100 watt smile.  Below that she was all fluffy green jumper, black skinny jeans and red and white stripy socks.  He stared at the socks.

“Ive got the kettle on.” She pulled him across the threshold.

Inside the tiny cottage was cosy. It smelt of wild orange and chocolate, cinnamon, the sweet smell of fir and woodsmoke from the fire . Ruairi took a deep breath in.  It smelt like home.  Patches of bright blues, red and pink leapt  out from the quilt on the couch in front of the fire.  And on the chair next to it, was Black Cat.  Ruairi melted into the couch and pulled Black cat into a hug.

Aoife brought two mugs of steaming spiced hot chocolate to the couch, smiling to see her beloveds purring together.  The  man with the thick black hair was lean and long and encased in brown skinny jeans and a blue sweater.  His face was lit up with joy as he and Black cat snuggled into each other with mutual love and affection.

“It’s so good to be home aye”, he smiled as he reached for the mug.

Aoife snuggled in beside him and  the cat.  “Was it terrible being there?”

“Let’s just say I’m glad I have a home to come back to,  The middle world needs to heal.”

As they talked the wind howled around the little cottage and the rain fell in hard drops.  The deer sheltered in thick copses, cosy and secure.  The wolf nestled with her pups in their den, and the world was quiet and content, despite the weather.

After a while the light in the cottage went out. The wind slept. The rain gave one last gentle spit, and the sun crept over the mountain to say hello.  Aoife left the warm nest of her couch where Ruari and Black Cat slept. Her heart squeezed with the love she had for them.  She picked up her boots and padded outside where she smiled and greeted the sun.  Thanks for returning, she whispered. And in an instant she turned herself in a raven, flying through the trees.. to the middle world.

About the Flash Fiction.  This story came out of a challenge on Facebook from friends who wanted to know more about the fae who lived in the cottage above which was a post I shared.  The image is so evocative, I couldn’t help writing about it!  The story took less than five minutes to write.  Hopefully these two characters will turn up in  my writing somewhere else. Thanks for the encouragement!

Billie Dean is a writer specialising in all things animal, fae and New Earth. www.billiedean.com