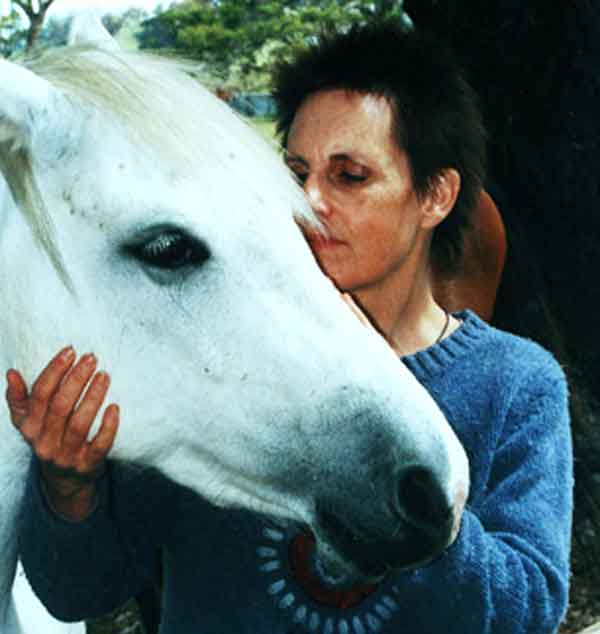 It is my belief that everybody has the ability to speak the silent language. Telepathy was used by tribes and shamans the world over to communicate with animals, nature and each other. It is that forgotten language of inner knowing, of fleeting thoughts, of images, feelings and words. Today we often “know” who’s on the phone, mothers have a connection with their children, and babies use it instinctively. But we forget how to use our telepathy. It is a part of us that is neither encouraged nor acknowledged. And we are no longer used to being still enough to listen to the voices in the silence – the whispers on the wind.

Nowhere in my life plan did it say – “Get Chronic Fatigue, talk to a tribe of Native Americans in your head, and then become a professional animal communicator.” I was a highly motivated stand-up comic with dreams of becoming a comic film writer/director. But Chronic Fatigue to me was an “initiation into stillness”. Instead of bouncing around the city doing a million things at a million miles an hour, I was hanging out with a tribe of Native Americans who just happened to be in spirit. They called me Woman of Twin Tongues and I often wondered what that meant. Did I need to learn Apache? But at the end of our intense time together I was instructed to become a professional animal communicator. The tribal elders meant the silent language of telepathy, something I was already proficient in with my own animal companions and all of nature.

Like most people I forgot my telepathy as soon as I became verbal. However, as a sensitive child I often felt the pain of plants as other children hit them with sticks or pulled their leaves and branches off for a cubby house. In those days, sobbing that a tree was crying, was considered the result of an over-active imagination. Imagine what they would have thought if they knew I apologised to stones as I tripped over them.

During my school years I just accepted strange channellings, intuitive knowings, past life flash backs, and the joy of animals being attracted to me. The psychic side of my nature was something I’d sort out later — after boys. Sure enough when animal companions came to me as a young adult, I saw the images they sent me. At first it was strongest from my horse, Sollie, who would discuss with me in pictures where we would ride. Finally, I read a book called Kinship with All Life (Amazon), by J. Allen Boone and everything fell into place. I realised I was communicating through feelings, pictures and words.

After that there was no stopping me. I was a journalist studying natural therapies, and communicating with everything from crystals to trees, creeks to birds, the wind to animals. It was what I did. Even during my crazy life as a comedienne, I had guides who would help me with my performance, and wildlife who gave me signposts.

After my flirtation with Chronic Fatigue, I became a children’s book author, encouraging children, through the world of fantasy, to understand that it was possible to talk with animals. I put the word out that I could interspecies communicate, and people found me through word of mouth until I had an international clientele including many animal sanctuaries. Today I teach telepathy to others and work to raise awareness about the truth of animals as spiritual and psychic beings. It’s time to accept the reins of interspecies responsibility and also further our own spiritual journey, through conversations with the souls who have come in the shape of animals.

My first client was a dog with terrible eczema who showed me images of himself being thrown out of the front of a truck cab. He said he feared the eczema was so horrible he would suffer the same fate with his new people. His people confirmed they had found him wandering the road and that he was terrified whenever they tried to take him out in the car. Finn healed after we cleared his fears, gave him a bottle of herbs and instructed his people to lovingly stroke the eczema-affected area.

Another racehorse had the gift of Sight and knew she was going to die on the rails during a race. She played up terribly whenever she got near the racetrack – even for training. She told me she would rather be an ‘eventer’, and was terrified of ending up as dog meat – an ending which her trainer threatened her with constantly.

I always counsel my students to keep an exceptionally open mind when discoursing with animals because you never know what sort of evolved soul they may be, or where they have come from. One of my clients was a dog who was frightened by ghosts. He was an extreme escape artist, which led to some very frustrating and expensive events for his human guardian. When counselled, I found the real reason for his behaviour was to encourage her to learn the language of telepathy herself. He had come to her purely to help her evolve spiritually.

Our animal friends are often here to teach us something important, whether it is the simple message of unconditional love, joy from living in the moment, exercising daily as a walking meditation or even to learn some kind of healing modality.

Beginning to Hear the Silent Language

To begin reawakening your telepathic facility:

© Billie Dean, 2003. All rights reserved. No part of this article may be reproduced in any format without prior written permission.
Originally Published in Conscious Living