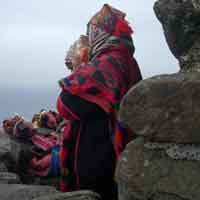 During the last Equinox, there were hundreds of shamanic fires held all over the world to hold and lift the energy of the planet.  I was invited to two of them, and had a big nudge from Spirit to not only attend, but to film them for my new documentary This Sacred Earth.  This nudge was confirmed when we received a small travel grant, which helped take a crew across the globe.  At both gatherings, one in the USA and one in Wales, we visited sacred sites and did ceremonial work.  Mother Earth thrives when people do respectful, conscious work with her, and this is one of the things we talk about in the documentary, which is about how we can save the planet by honouring her and ourselves.

We travelled first to the mist-filled Oregon coast where the spiritual leaders of the Inka Q’ero, Don Franscisco and Don Humberto, were doing sacred work with the public and with a group of Western shamans who I am honoured to call my colleagues and friends.

As we climbed Cape Perpetua, the whales came out to greet us, acknowledging the spiritual work we were doing and the presence of so much Light.  This was encouraging to the group who settled down in an old stone shelter to do work with the spirit of this mountain and others we brought with us from our personal connections.  Being Australian, I called in Uluru and the mountains where we live.  Don Francisco is particularly interested in Uluru and we have invited him to travel there in 2009.  I wasn’t prepared for the jolt of energy calling in this mountain brought!!  The spirit of Uluru was definitely present and the messages I received from the mountains were about flying like eagles on the updraft.

Filming on the foggy beach at sunset called hundreds of orbs – those fascinating and love- filled luminous spherical presences.  They were also outside the cabin we stayed in and around the fires of the gathering.  Knowing they were with us brought more acknowledgement of the work we were doing.

It was hard to leave friends and mist-filled camera frames, but at 5 am we were on the road again – to the wilds of another coastline – this time in Wales where we filmed the Soul Companions: Wisdom Keepers Gathering at which I was speaking.  The highlight, apart from meeting a group of teachers I felt instantly connected with, was filming an ancient Celtic ceremony led by Geo Trevarthan, at St Govan’s church.  Meditating on the rocks who live there brought in, for me, ancient spirit priestesses and fairy folk, who whispered secrets.  The energy from the sea was sweet and welcoming.

Ravens have been following me everywhere since I started This Sacred Earth, so while I received personal messages from some of the birds, I asked Philip Carr Gomm, Chief of the Order of Bards, Ovates and Druids, what Raven meant in the Druid tradition.

“Fate of the Earth,” he said.  I felt those chills of excitement you get when you know Spirit is speaking.  This Sacred Earth is about the fate of the Earth and how each and every one of us can make a difference by living in a more ceremonial, Earth-honouring way.  The Ravens  blessed our project and I knew we were on the right track.

Leaving Pembrokeshire was again difficult after too short a time – just a weekend.  But this wasn’t a holiday.  We were on a mission to film, honouring a call which had been sent by Spirit months before.  My only guide was my heart.

Our cinematographer felt the call to visit a nearby Welsh castle and we spent an hour or so revelling in re-living medieval history.  As a sensitive I was soon overcome by the ancient trauma held in the place — whispered stories of  blood and intrigue — and longed for a windy beach to wash those feelings away.

Instead of beaches, we found Glastonbury Tor, whose energy always enlivens me.  Late Aboriginal leader Gaboo Ted Thomas  always said if you have a flat battery, climb a mountain.  And so we were re-charged by the wild elemental wind which lives there.  It is so similar to our own mountain at home that I call Braidwood, Australia’s own Avalon.

We all have special places in the world where our souls have lived before, and for me, Glastonbury Tor is one of them.  That ancient site and I are old friends and every time I visit England, I have the urge to make pilgrimage to Glastonbury, where Avalon supposedly once stood.

The Tor is another place which has suffered trauma at the hands of man, and I was called there last year to do healing work on the tower itself.  The Tor spoke of murder and showed me macabre scenes, asking for help.  Both this year and last year I lugged my medicine bundle up the steep hill, and did some healing work.  I had the distinct impression the Tor was pleased to see me, but the healing wasn’t complete and I would be called back again soon – with a crowd of old souls to re-enact a healing ceremony I am only just now beginning to remember.

Interesting too, as Andrew, my husband and fellow filmmaker, wanted footage of me speaking on top of the Tor.  I was happy to narrate but felt uncomfortable talking about my own earth-based teachings in that sacred place.  I wanted to be at home with my dogs and horses.  Before I could mention this to Andrew, clouds of rain and wind appeared, halting our filming.  I laughed.  It was no co incidence.  Obviously the Tor agreed with me. 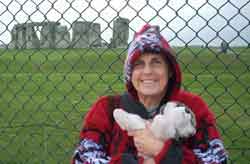 Billie Dean with Thunder at Stonehenge

Finally our journey took us to Stonehenge where hundreds of tourists roamed.

“We are lonely,” said the spirit of Stonehenge.  “All these people come here but there is no connection.  There is no heart connection, no time for their stillness.  Please tell them to meditate.   We are not isolated rocks in the wilderness.  We are living beings.  We stand here for eternity, with the wisdom of the ages deep in our soul.  This is what we offer you.  We are alive and in 2012  we come alive for the people who hear and see in what will be known as the Age of Miracles.

“How can people connect?  By sitting on the Earth and opening their heart chakra, and asking for communication.”

I stood in the cold, outside the fence at Stonehenge and watched the busloads of people with their cameras.  None of them had wild grins on their faces as I did.   They photographed the rocks, ticked them off their To Do list, and missed the magic and mystery that lay just beyond them –within their reach – if only they knew it.

I turned within and realised why the call from Spirit to travel and film was so loud.  There is another reason that shaman and wisdom keeper gatherings happened on this Equinox around the world.  I saw the trail of light we left, weaving a tapestry as we each carried the energy of place to other places, as Mother Earth intended us to do.

A shaman always honours the call of Spirit no matter how impossible it might seem – and impossible is a word which has fallen from my personal vocabulary in a world where miracles happen, life is magical and the stones and sacred places always have a lot to say.

Apart from some stunning interviews and footage for This Sacred Earth, the thing which I most took away was the loneliness of those sacred stones wanting human connection in a world which has forgotten how.  So next time you visit any sacred site, open your heart and mind and remember that this place is a living being who needs love and respect.  And watch the magic unfold!

© Billie Dean, 2010. All rights reserved. No part of this article may be reproduced in any format without prior written permission.
Originally Published in Conscious Living.